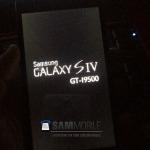 Before the much awaited Galaxy S4 releases, we expect many new rumors to pour in. We have found a leaked image of the Korean version of Galaxy S4. This new image from Sam Mobile is being quickly shared and circulated all over the web.

The Galaxy S4 photo will remind you of the old Galaxy S2 with defined corners. Unlike it predecessor Galaxy S3, it does not have a curved body. It packs in a new display technology called SoLux. This means that the S4 will not be available with AMOLED display technology. Apart from offering staggering and realistic quality image output, it is yet to be revealed as to what this new technology will offer its customer.

Newly leaked news on S4 also revealed much more on its specifications. It is believed that the Galaxy S4 will be powered with Snapdragn 600 processor from Qualcomm. The device will be powered with 2GB RAM and it comes with a range of internal storage options such as 16GB, 32GB and 64GB. It houses a powerful 13MP.

The Galaxy S4 will come with a replaceable battery and its dimensions are 140.1 x 71.8 x 7.7m and it weighs 138g.  Many experts from the tech community believe that Samsung is delaying the release of S4 and wants to time it with the launch of HTC’s flagship device HTC One M7. The HTC device is offering truckload of features along with powerful battery. The HTC M7 seems to be a very promising smartphone which will help HTC make better business.

Samsung is currently facing power problems with Exynos 5 Octa chip and HTC is hoping to make the most of it. Even though the competition of HTC M7 and Galaxy S4 appears to be a David and Goliath battle, the Taiwanese company aims at building a sizeable customer base this year and offer good competition to Samsung and other brands