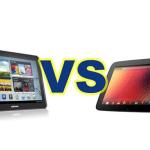 Comparing the two, Samsung Galaxy Note 10.1 and Google Nexus 10 is too tricky, because both the competing products have so much in common and that is the reason why ordinary users will not be able to tell the difference.  The only differences that common users can tell will be the glaringly apparent look and feel, but that is a subjective issue, and therefore cannot be much commented upon. Another important point to note is that the Google Nexus 10 itself is manufactured by Samsung under Google’s brand name. It is therefore natural to see Samsung’s philosophy and quality in Google Nexus 10 as well.

At 800 x 1280 pixels and a 10.1 PLS which works out to a density of 149 per inch, the display is much larger and gives more functionality to the Galaxy Note 10.1. It means using the display more efficiently for learning, creativity and work. Being bigger enables Samsung Galaxy Note 10.1 to be used as a browser. The other feature is you can use it for running many applications side by side whilst you do some drawing and writing.

Google’s Nexus 10 has a slightly smaller screen display, but more than compensates for that with PLS LCD technology which ensures wider viewing angles and greater protection for the glass surface, which is manufactured by Corning Gorilla Glass 2. If we are to go only by the screen resolution, then Nexus 10 wins hands down with 1600 x 2560 pixels and a density of 300 ppi. In fact, it is the highest for any product of this class, surpassing even Apple’s latest iPad with Retina display. No doubt this is a selling point for Google and their claim as producers of the world’s highest resolution display to date.

Though there isn’t much of a difference, the fact remains that Nexus 10 is a little heavier than Samsung’s Galaxy Note 10.1. In addition to the weight, Google’s Nexus 10 is a little thicker too, but that is not visible though. It weighs 603 grams precisely. Unless you have a micrometer, you will hardly be able to tell the difference.

At least in the operating systems that both use, there is a difference you will have to take note of. It should be noted that the first shipments that Samsung made with their Note had Android 4.0 for the operating system along with TouchWiz, exclusive to its interface. Later models had Android 4.1, also called the Jelly Bean, for the OS. There is however no word about when they will be releasing the newer version Android 4.2.

On the other hand, Google’ Nexus 10 had the latest Android 4.2 in them right from the first release itself. With this also came some exclusive features like Photo Sphere, Day Dream and Gesture Typing, making it look a little more modern then the competing Galaxy Note. The other noteworthy features in the Nexus are Google Now, Android Beam and of course Google Search. That it gives some added punch is very much apparent, and enables users to share movies, watch You Tube videos and images make it a slightly better product.

Though there aren’t many differences in Camera, there is at least a small difference in their ability. That the front camera in the Nexus can support up to 10 users in chat is really a point in favor of it, but other than that, features like auto-focus, LED and geo-tapping are the same. The Galaxy  Note 10.1 supports SD micro card, which is not case with Google Nexus 10. Battery life is for most part not comparable, considering that it is mostly dictated by usage pattern and features accessed. In terms of price, Samsung it appears is a little more expensive on the whole.

What do you think about above brief comparison article of   Samsung Galaxy Note 10.1 Vs Google Nexus 10, which one will you prefer to buy, Let us know in the comment section.