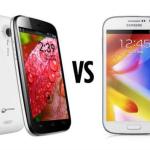 Both Micromax A116 and Samsung Galaxy Grand will hit Indian market very soon. These two phones are targets mid range smartphone buyer. Among them Micromax A 116 is the cheapest, and features HD display. whereas Samsung galaxy grand has TouchWiz UI, multi-app running capability and Samsung brand. Here we will discuss briefly Micromax A116 Vs. Samsung Galaxy Grand, to let you understand which one you should buy.

Samsung Galaxy Grand duos features a 5 inch WVGA display of 480×800 pixels resolution. A 1.2 Ghz dual-core cortex A9 processor powers Galaxy grand. Galaxy Grand was announced on December last year, and available in the market since last week of January. 1GB RAM empowers and enables it to run Android 4.1.2 Jelly Bean operating system. This phone works on all around the spectrum 2G, 3G and 4G (country specific).

For connectivity it has Bluetooth 4.0, Wi-Fi 802.11 a/b/g/n standard with WiFi direct and Micro USB port. it has 4GB of inbuilt memory and its expandable through MicroSD card upto 64 GB. To backup it’s features it has AGPS, Proximity sensor, Compass and accelerometer.

Along with that it has a 8MP primary and 2MP secondary camera with auto focus, Image stabilizer and geotag.

Samsung Galaxy grand duos is capable of running multiple applications in same window. Along with that users will get several premium Samsung features like Direct Call, Pop Up play, Smart alter etc.

The Samsung Grand Duos Smartphone is launched with a price tag of MRP Rs. 21500.

Micromax A116 HD is the latest launch of Micromax, and with this they are trying to grab the mid range smartphone market. Micromax A 116HD is the successor of Micromax A 110 Canvas 2, with improved processor, display and camera.

Micromax A116 HD also features a 5 inch display with a resolution of 720×1280 pixels. The 720p IPS HD display makes images and videos crisp and clear in A116’s screen. To support it’s features it has a 1.2 GHz quad-core Mediatech processor and 1GB RAM. Due to its excellent hardware support Android 4.1.2 Jelly Bean runs smooth on Micromax A116.

For connectivity it has WiFi, Bluetooth 4, and Micro USB port. it has 2GB of inbuilt memory and it’s expandable through MicroSD card upto 32 GB.

To enable maps and navigation it has GPS, Proximity sensor, Compass and accelerometer.

Micromax A116 Vs. Samsung Galaxy Grand

Comparison Chart of A116 vs Galaxy Grand

Micromax and Samsung both are launching decent models in the market. This time Micromax A116 HD, Galaxy Grand and Karbon S1 are fighting together to grab the smartphone market in 5 inch segment. After reading Micromax A116 Vs. Samsung Galaxy Grand, which one would you prefer to buy? let us know in the comment section.