Galaxy Note 3, a must mobile device for business users 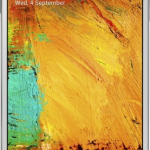 Samsung has added another great big screen phablet to its Galaxy series of Android mobile devices. This release has just come after its great product Galaxy S4. Previously, when Galaxy S3 introduced to the market, the company released Note 2. The product introduced to the world during an event in Berlin, Germany. The Note series in Galaxy always had a bigger screen; this one has even bigger screen size with full HD support. We have done a full listing of the features and a small specification comparison of the Note 3 with its previous version.

What are the features and comparisons?

Size does matter to most of the smartphone users. Samsung has not disappointed the users, the screen size is now 5.7 inch, and previously it was 5.5. Amazingly, the thickness of the device has gone down from 9.4 mm to 8.4 mm. By increasing the size, the company has worked on its weight as well, reducing it from 183 g to 167 g. Moreover, the Note 3 comes with some great color choices and the leather flip cover gives the mobile a good Notebook like feeling.

Now coming to other important features such as the display, Samsung has always used Amoled displays for all its high profile smartphones. The screen display is a 5.7 inch super Amoled, which supports a full HD display. Remember, the previous Note 2 supported only a 720 P high definition screen.

The all-important processor got an improvement from previous Note. Present version comes with a Quad core processor clocked at 2.3 GHz. Galaxy Note 2 was also a Quad core variety, but clocked at 1.6 GHz. The RAM memory got a hike from 2 GB to 3 GB.

By default, the storage capacity comes with 32 Gb and a 64 GB version. This is almost the same as that of Note 2. The phone runs on the latest version of Android OS, that is the 4.3 JellyBean. The connectivity in Note 3 supports various versions of WiFi, 3G and 4G. It also supports Bluetooth version 4 and the latest Near Field Communication.

Like the predecessor, the battery strength of Note 3 is 3200 mAh, while the Note 2 supported 3100 mAh. Connectivity with a computer and the charging of the mobile are through a Micro USB ports.

Nowadays, most of the smartphone users use their mobile as a professional camera. Note 3 has not disappointed them as well, with 2 MP front facing camera and a whopping 13mp rear camera. In Note 2, the rear camera is only 8 MP. There is no word about the quality of the camera, covered in the review of the same Galaxy Note 3 later. For all smartphone users, this is a great little choice to enjoy all the latest Android OS and hardware features. Presently it is available in USA and later in other countries. By October, Samsung is expected to jump into the wearable Android devices with the expected release of the Galaxy gear with a camera.