Why Nexus 4 is better than Moto G 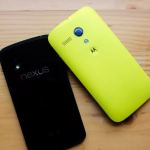 This Guide will help you to choose the best phone to buy under the comparisons made between Nexus 4 and Motorola Moto G. The main factor that you should go with Nexus 4 because, the features and specifications are better than MOTO G when compared to the price and specifications.
When Motorola Moto G was launched in USA the price of 8GB and 16GB variants was 100$ and 179$ respectively. And the devices were also unlocked, but recently when ebay india has featured MOTO G, the price of this phone in india was around 22,ooo INR. I don’t know why the price is more for this device  because it has very less specs when compared to nexus 4 which is around 23,ooo INR.

Despite of all other similar specifications NEXUS 4 is a winner in Camera, RAM Size and Screen Display. This is why Nexus 4 is better than Motorola Moto G

For more news ,updates, tips and guides on android please subscribe to us and do give us your right feedback!