Samsung Galaxy S5 to be Unpacked at MWC 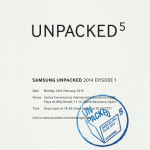 The most exciting rumors and leaks are becoming true as the rumors about Samsung S5 have finally proved that it’s a reality and the company sends out invitations that the mobile phone will be showcased at MWC 2014 that is on February 24th 2014. Samsung has been releasing many devices! It has launched all type of products with all type of ranges and now its time to show them that the future lies within them with the excited device code-named to be “Samsung S5 “.

Now we will check out the details of this device –

Camera
We have seen many cameras with minimum features and good quality, like the same S5 also has a 16 mega pixel rear camera with a ISOCELL sensor was marked for 2014 and 2015 smartphones. the camera is expected to have some amazing features as Samsung comes with new inventions and updates on new devices.

Screen Display
It has a very Big and wide-screen which is expected to have nearly about 6 inches. Morely the touch screen would be protected with a Gorilla Glass protection, if it would be a 5.25 inch one then it might be a little harder to hold in your hands and this may move you  to service centres whenever you fail to hold it properly! It has a 1080 p resolution HD recording screen and  S5 may have to have switch to a LTPS LCD display manufactured by Sharp. Earlier we Expected to have a 4k resolution screen and if this happens in the coming day then it would change the fate of Samsung in India!

Battery Backup
S5 is set to get a 2,900mAh battery,This could well mean improved battery life, with the new smartphone lasting longer between charges. But as to my experience and point of judgement, Samsung should concentrate more on the battery backup and should improving some bits in its part. Except this i have no issues with Samsung !

Processor
This smartphone would be a 64 bit one and having can make your work more easier. It has a  Snapdragon 800 CPU running at 2.5GHz  processor with an 2Gb or 3 Gb RAM  size.

Plastic Material?
Some of the news on the web say that this phone is to be manufactured with a plastic and the metals covers is to be vanished for this device. Now don’t get into panic, this is just a rumor and lets see the news again on the launching day. The Prime will have a 5.2in 2,560×1,440 display, while the standard model with have a 1,920×1,080 screen.

These were some of the features and specs that got leaked and many more are to be reveled while everyone got the invitation but there is no confirmed new about the specifications. To know the exact one we have to wait and watch until 24th where the MWC will start on 24th February 2014, Barcelona.

If you have any news updates on this smartphone , then be the first one to inform us and don’t forget to subscribe with us via email. Because you and me both know that we cannot live with the technology  and that’s TRUE.