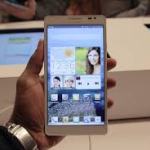 Huawei company has been releasing many smart phone devices in this month like a rapid fire, previously it released Mediapad X1 and now again it has launch a smart phone named Ascend Mate 2. I think it’s the first 4G phone from Huawei and it has got some amazing pro specs with a quality services and performances. This manufacturer has become a pip to other models like Samsung and LG -because of the quality , design , performance and the development in the user interface. This company has become a demanding  product and this puts a smile on every worker who has taken part in making this happen Cheers!! to them. Sure it will reach to heights in  coming years.

Ascend Mate 2 4G Android Smart Phone comes with a 6.1 inch screen display  along with the 1280 x 720p of resolution. It has a HD screen but the resolution is only 720 p and not a 1080p one. This wont matter somebody if he sees the other side of the specifications. As it is a 4G phone it has a  LTE capability and the glass is protected with a Gorilla Glass Protection. The board in the phone comes with a 1.6GHz Cortex A7 Qualcomm MSM8928 Snapdragon 400 processor with a RAM size about 2GB.

It has a 13MP of rear facing camera  with LED Flash along with a front facing camera of 5MP, the camera is a bit improved camera unless compared to other smartphones and of course the camera has a shutter speed when capturing photos. This device runs on a 4.3 Android  Jelly Bean Operating System and the battery backup is about 4050 mAh.

Manufacturer: Huawei
Model: Ascend Mate 2
Type: Smartphone
Camera: It has a 13 mega pixel rear camera, 5 mega pixel front camera along with LED flash lights and improvised cmaera features like Auto focus, Red- Light Removing and some others.
Hardware: It unpacks with a 1.6GHz Cortex A7 Qualcomm MSM8928 Snapdragon 400 processor with a RAM size about 2GB. Seeing the hardware specs the phone can be easily useful for 2 years without any service in software sector unless  to be considered when physically damaged.
Software: It runs on a 4.3 Android Jelly Bean OS which is the best mobile OS at present. The android 4.4 kitkat can take some time to update in these phones and i am not sure about the month and dates. So if you buy this phone stay tuned to updates on the software sector.
Screen Display: It has a 6.1 inch Screen Display with a Gorilla Glass Protection on the touch screen. It am pretty much satisfied writing this post and the phone also appears to have some pro specs which are worthy to have it!
Connectivity: It has a  Stereo FM Radio, Bluetooth 4.0 with A2DP and LE capabilities, micro USB 2.0, USB slot, WIFI direct capabilities.
Storages: The On board memory , i mean the internal memory is about 16 GB and the expandable is upto 64GB.
Battery Backup: This device has a 4050 mAh battery backup which has a backup of about  minimum 8 hours to 12 hours.

Conclusion: The price is not yet announced. But according to past releases we assume the price will be around $250