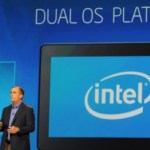 Trials of Computer with dual operating system had been tried, but proved futile. Nothing different should be expected now.The prospect of running PCs on Windows and Android simultaneously making them hybrid Android machines does not throw any light of hope for the gloomy PC industry.

To boost their dwindling Sales, the Computer manufacturers have put forth the gimmick of running PCs with dual operating system. The steadily diminishing PC Sales had reached the lowest point last year and on Thursday, came Sony’s declaration of quitting the PC segment. The new effort to boost computer sales would allow users to access both Windows software and Android apps in a single click on the icon or a push on the button. There is no need to reboot the system to switch between the operating systems as envisaged by the companies.

Setting aside theories, the reality does not favor the idea of the best of both being made available to the consumer. Android together with Windows 8, which is already confusing users, could add to more complexities to the prevailing confusion with the latter rather than making things simple. Although the PC makers are trying to make the switch between the systems seamless, the lag time in switching between the systems is an irritant for the users preferring seamless operation.

Android apps, which have been built for small screens, may pose problems regarding Security and adaptability to the big screen. In order to support two operating systems, powerful processors will be necessary which would require High power consumption. This would stress the batteries and requiring frequent recharge. A fact that may not be to the consumers liking albeit Intel’s ability to deliver improved processors.

According to the Head of Dell’s tablet business Neil Hand, the customer is more concerned about the data and application and does not bother about the operation system underneath. The idea is too much complex and confusing.

Barring Dell, others will jump into the band wagon of the dual system PCs. Chipmakers Intel and AMD had set the air abuzz at last month’s Consumer Electronics show about the two in one PCs. Samsung and Asus have already exhibited their machines with dual operating systems. The Transformer Book Duet, Asus’ dual OS machine was demonstrated at the CES and is expected to arrive in the US market by mid 2014. But the availability of Samsung’s Ativ Q that was announced in June is uncertain. At least Intel’s conviction about the success of converting PCs to Android machines in days to come has been reaffirmed.