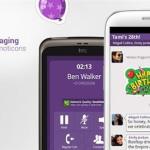 The Viber messenger is a cross platform messenger for mobile phones. Viber has edge over its competitor because it comes with a voice chat feature which is quite good. Viber does not require any sign up and on install integrates with the contacts list. It is a feature packed free app.

The plus point of Viber messenger is its voice feature. It supports good quality voice calls. Although conferencing on voice calls is not supported yet. The voice allows people to make calls via the data networks; this can result in cheaper calling for international contacts. When used on a free WiFi network it offers a chance for people to stay in touch without heavy calling costs. Unlike other voice calling services like Skype the Viber installation is lighter and also it does not require a sign in. By integrating with the contact list Viber locates other contacts that are using Viber making it easy for people to start using it.

Viber messenger works across different platforms like IOS, Android, Window Phone, Black berry, BADA and Symbian OS. Thus people can communicate using Viber with contacts who use different platforms. This makes it easy for people to stay in touch despite the platforms that they use.

Viber Messenger is an Ad free app. It is a light weight app and does not consume much battery or memory in the standby mode.  When used for voice call over 3G networks it gives a good output.

The main drawback with Viber is that users often experience call drops even when they have a good internet connections. It has been known to hang and crash sometimes.  The sound quality can be poor at times. Although when it works it has excellent sound quality.

One important feature that is missing is letting users know when a contact is not connected to the internet and is unable to take voice calls. Another feature that needs to be present is to know when a user was last seen using the App. These small features are important on a messaging app and hopefully future releases will fix this problem.  Viber does not support video chatting currently.

The Viber Messenger has some great features. In comparison with its competitors it needs some more consistency in the performance of voice calling. The fact that it allows people to make international calls is a big selling feature for the messenger service. Despite the Kinks in its working the messenger offers the best call quality for an app its size. Though the frequent call disconnects can be quite annoying.

Download Viber for Android for free from Google play store.