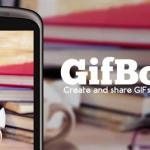 GIFBoom (Animated GIF Camera), is compatible with both IOS and Android devices, is a free app which can create animated .gif images. But what’s a .gif file? This little file extension stands for Graphics Interchange Format and was introduced by CompuServe in 1987. Disagreement between CompuServe and the patent holder, Unisys, led to licensing disputes in the early 90’s which in turn spurred the development of the .png format in 1994 as one way around the problem.

One of the reasons the .gif format was and is so popular is that it supports mini-animations with a file size a tiny fraction of other video formats. This file size saving is important anywhere that has a bandwidth restriction only allowing a certain amount of bandwidth to be produced. Once you have left the confines of a single computer and have to transmit your file, bandwidth rears its ugly head. One original problem with .gif formatted files was that it was quite difficult for non-savvy computer users to create them. Virtually everything had to be individually specified, from the color palette to the rate of play, and calculating all those numbers could be quite a daunting task, even to those individuals that know the computer and the program inside and out.

GIFBoom solves all of these problems, allowing anyone to create a .gif extension file no matter how technically savvy they are. Using the camera icon (“Post Mode”), you can easily auto-shoot a string of up to 20 photos (sometimes more) as well as auto-stitch them together into an animated .gif. No more pesky calculations like “Okay, my target frame rate is 021…what does that come to in hexadecimal?” The user can also import pre-shot photos and other material. Adjusting things like the frame rate, digital filters and image-cropping are also easy with this app.

One other advantage of GIFBoom is its social “connectedness.” Users can upload their results to Facebook, Tumbler, Twitter, and other social networking cites with little to no hassle. GIFBoom also has its very own social network making it easy to store your mini-video clips to another hosting cite on your phone. The GIFBoom network is more fun than most, though… possibly due to it being seemingly dominated by the younger generation and by those who are not technically savvy.

Even though the GIFBoom app still costs money aside from a minimized free trial, it is worth every penny. It works on all Android phones (and it should as it is an Android app) and provides simplicity to what would otherwise be a seemingly endless and stressful task.