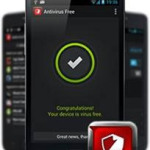 With the ever-increasing popularity of Android ecosystem, the threats of malware are increasing day by day and to tackle this problem it is necessary to have an efficient Anti-Virus installed in your Android smartphone. As a general precaution I tend to not install untrusted applications from sources other than the Play Store, and also check my sd card files on my pc for any virus. The reason most users stay away from installing an antivirus app on their Android device is because most of the apps are battery huggers and heavy on system resources.

That’s exactly where Bitdefender Antivirus jumps in. The name “Bitdefender” is synonymous with the antivirus industry and needs no introduction. The PC version of the app has been an award-winning product and one of the most popular security software’s for PC for years now. Now let’s discuss my experience with the antivirus in detail.

After installation of the App from the Google Play Store for the first time, you are welcomed by a usual License agreement. There is nothing questionable in the agreement and you can read it if you have ample time. 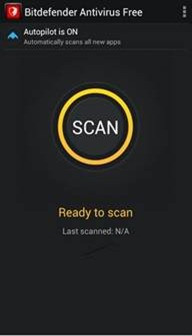 Upon agreement of the terms, you will be greeted with a minimal and simplistic layout which should not get time to get used to. There is a big Scan button on the main screen which will allow you to scan your complete device for any kind of malicious apps or files. The virus database of the app is not stored locally and every time you scan the app fetches the database from the server, so you need to be connected to the internet while performing the scan. This isn’t much of a problem since most of us are connected to the internet 24 x 7. The positive point of database being stored online is that you won’t need to download the updates of virus database manually, a feature not found in any other Android antivirus. Also this helps in far better accuracy in scan results.

The scan button has three colours which indicate the health status of your Android Device. The colours are Green, Yellow and Red. The Green colour signals that your device is fully protected and no action is required on your part. Yellow indicates that there is some issue with the antivirus though not as critical. A red light means that your device might be under threat and an immediate action is required on your part. 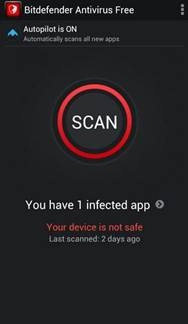 For testing purposes the Z4root app was installed on the device. The app was used to root older Android devices basically the Froyo ones. Though the app is not a virus it does contains an exploit. Most of the Antivirus on PC mark it as a virus, so this would give us a good idea about how good the app is on Android. The app immediately marked it as a virus. It also marked the .apk file of the same application stored on the memory card as a virus. The scan button too turned red, and as soon as the application was uninstalled and the apk file was removed the Green light replaced the Red one.

The application itself is just 3.32 MB in size which explains the point mentioned earlier that it is not a battery hogger. The only service running in the background is the “Autopilot” service which keeps checking installation of new apps on the device for virus protection.

The service can be easily turned off by clicking the Menu icon on the main screen and then Settings. The other settings offered by the app are the option to toggle scanning file present in the memory card and to upgrade to the paid version of the app which adds new features such as Anti-theft, We Security among others.

The best part of the app is that you can just install it and forget everything. One does not even needs to tinker with the settings and you will stay protected all the time. Though the free version may not provide the best protection ever, it is still great at what it does.